On 16th February 2022, Innoqua inc. (Head Office: Minato-ku, Tokyo, Japan; CEO: Yota Takura), an environmental transfer startup, succeeded in spawning coral (species:Montipora digitata) in a closed aquarium system (Toranomon, Tokyo) that artificially recreates a coral reef. By recreating the coral reef ecosystem in a different season, corals that normally spawn only once a year, usually in June in Japan, were able to spawn in the middle of winter. 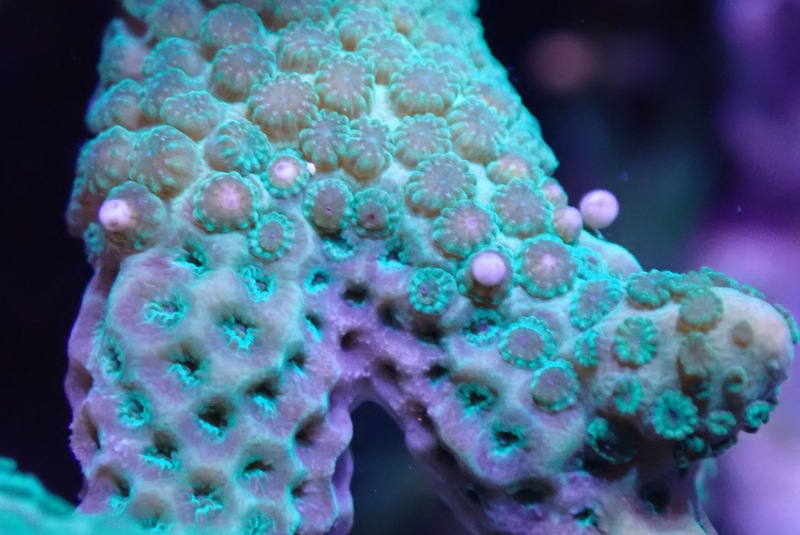 Image of spawning of Montipora digitata

As a result of the success of this experiment, we expect to be able to control the timing of coral spawning. With this research progressing, it enables researchers to study coral eggs and larvae at any time of the year, whereas it has been impossible to do so only once a year.

Although coral is the center of biodiversity in the oceans, where 25% of marine life lives, it is threatened with extinction, this research is expected to deepen our knowledge of coral conservation and advance basic research on coral as a source of innovation in drug discovery for instance.Coral reefs are valuable natural resources for oceanic countries like Japan, but it is expected to be lost for 90% by 2050.

Furthermore, we believe that this research will lead to increased value for Japanese companies. Recently, biodiversity has been attracting more attention as the next step after decarbonization, such as the Taskforce on Nature-related Financial Disclosures (TNFD). With this initiative, there is an increasing need for companies to disclose their impact assessment on biodiversity as well as impact on climate (TCFD) . Japan's progress in basic research on coral reefs, which is representative of marine biodiversity, will enable Japanese companies to take the next step while being internationally advanced.

“Fully artificial environment” refers to an aquarium (i.e., a closed environment) where artificial seawater is used and parameters such as water temperature, light, and nutrients are controlled by our IoT system.

For this experiment, we used coral that had been raised in our managed aquarium for more than three years.

※Environment Transfer Technology = A technology that controls various parameters, such as  water quality (dissolved concentration of more than 30 trace elements), water temperature, water flow, lighting environment, and the relationship between various organisms including microorganisms, by IoT device to recreate the environment of a specific aquatic ecosystem in an aquarium. 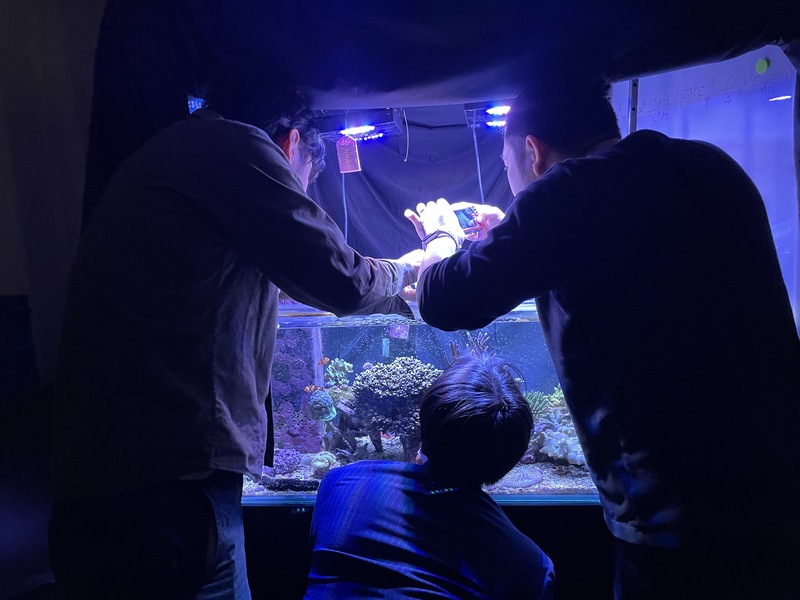 Background of the research

Coral is an animal that was born about 400 million years ago and lives mainly in the tropics. They also play an important role in biodiversity, with 25% of marine life living in coral reefs, which account for only 0.2% of the ocean's surface area.

Coral reefs also play an important role in supporting human social life by providing shore protection and fishing grounds, as well as materials for construction and household items, and in recent years they are also expected to be used in pharmaceuticals.

Coral is essential to the market economy and social life from the standpoint of ensuring biodiversity and protecting the environment, and it is estimated to have an annual economic value of over $375 billion (about 43 trillion JPY). (*1)

However, it is highly likely that 70-90% of coral reefs will disappear in 20 years due to rising sea temperatures caused by climate change, making coral reef conservation a top priority for protecting marine biodiversity and the economic value generated from it.

Until now, most research has been conducted by bringing coral back to the laboratory just before spawning, but now that we have succeeded in spawning coral in an artificial environment, we can study the life cycle of coral regardless of the time of year.

If this experiment progresses to the point where coral can be treated as a model organism for research studies over many generations, like Mouse and Drosophila, it will greatly advance basic coral research and contribute to coral conservation.

Coral reef research is very important for Japan because there are about 450 over 800 species of corals live in Japan (*3). Japan is a “marine country” whose territorial waters are 12 times larger than its territorial land.Therefore, we believe it is necessary to promote "blue" as well as "green" in the environmental field. Research on coral reefs, which represent "Japan blue," will symbolize Japan's uniqueness in the world in the future. 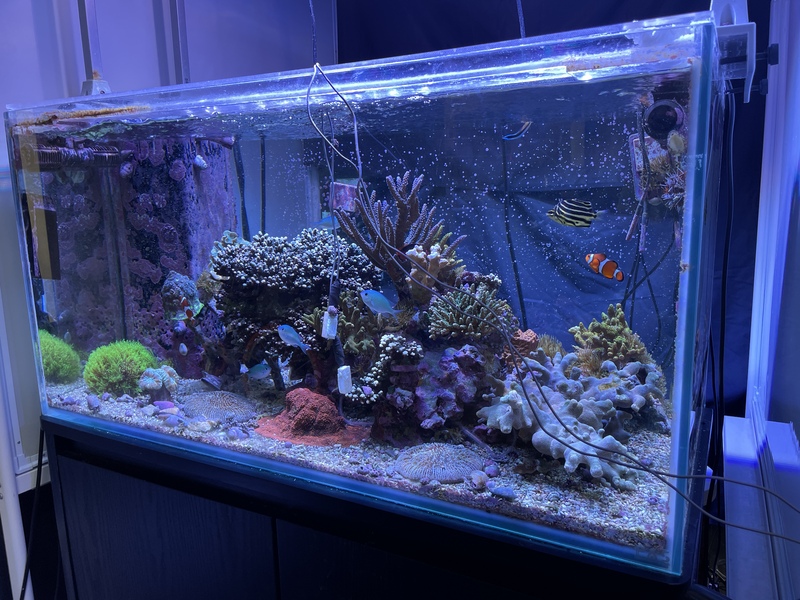 The aquarium used in the coral spawning experiment

Using the environmental transfer technology, we have created an artificial ecosystem that allows for long-term and healthy coral growing environment. Started controlling the water temperature of the aquarium, which was kept at 24 °C, from 2021/8/23 and .synchronized with the December seawater temperature of Sesoko Island, Okinawa.

Continued breeding and succeeded in confirming the spawning of Montipora digitata on 2022/2/16.

In the future, we would like to build an experimental facility where corals can spawn every month, in order to increase the implantation rate of coral larvae, and to conduct research on the breeding of corals that can tolerate high seawater temperatures.

There are concerns about what will happen to coral reef ecosystems, which are the platforms that nurture the diversity of marine life, due to global warming. On the other hand, it has been confirmed that coral larvae spawned by coral reefs are being transported by ocean currents, and their distribution areas are expanding northward. Research on coral spawning has been progressing, but there are still many unanswered questions. One factor is that in natural environments and large aquariums, there are many conditions that determine the timing of spawning. The development of technology that can artificially control the timing of spawning in a small aquarium like this experiment is expected to contribute to the future development of coral spawning research and new developments in coral transplantation projects.

In January 2022, the researchers were able to reproduce "spawning" in a completely closed system (aquarium). This time, based on the annual water temperature data of Okinawa, they reproduced the spawning process at different times of the year. This shows that it is possible to induce spawning throughout the year. I believe this will lead to the development of coral propagation methods that use fertilized eggs as a base. The establishment of this technology is also extremely important from a scientific perspective, as it will enable us to obtain precise data on the life history of corals in a completely closed system.

Reef-building corals have a hard calcareous skeleton that forms a complex three-dimensional structure. These structures provide habitats for a variety of organisms and support extremely diverse biological communities. However, global warming and ocean acidification are significantly reducing the survival of reef-building corals, and there are concerns that they may disappear. Artificial spawning technology for reef-building corals not only contributes directly to their recovery, but also enables the stable supply of samples and is expected to contribute to basic research.

Innoqua's research on the marine environment using IoT  solves issues in the coexistence of nature and humans, and we decided to support the company because we believe it is a highly ambitious startup for solving social issues, which is our company's philosophy. As the search for a new way for the environment and the economy to coexist continues, and frameworks such as TNFD are attracting attention, it is significant that such a world-first achievement was born not in a laboratory but in a startup company.

Above all, Innoqua's love for coral has fostered the technology to create the mysteries of life in Tokyo, where the environment is transported.

I am convinced that the direction we should be aiming for is for society as a whole to support highly ambitious startups from a long-term perspective, so that the environment and the economy can be in balance, exploitation of nature can be transformed into symbiosis, and humanity can achieve essential, sustainable wealth.

I've been watching the research that has been going on at the Toranomon Lab since April 2019. I believe that this coral spawning, which was made possible by environmental transfer technology, is the result of these efforts. The environmental transfer technology being developed by Innoqua is not a cutting-edge technology, but a "deep tech" that is an assemblage  of technologies to solve problems. I believe that we have seen a fragment of the possibility of changing the world through the development of this technology. A business that can change the world is born from the passion of just one person. I hope you all will change the world.

In 2019, right after founding Innoqua, I saw coral spawning for the first time in Okinawa.

“I want to show this to everyone," was the simple idea that led me to take on this challenge.

In the first year, we succeeded in brooding eggs, but in the second year, we had a number of failures that caused the parent coral to become unhealthy.

I am so happy that we were able to finally achieve success for the third time.

One more surprise this time was that an unexpected coral spawned.

In fact, the coral that spawned was one that I purchased when I was in graduate school and decided to get involved with corals again.

I wasn't very good at keeping coral, and many times I made coral’s life in danger, but I met Naoki, the CAO (Chief Aquarium Officer), and with his support, I managed to grow the coral to a large size.

I remember well the days when I was removing Anteaeolidiella takanosimensis, the enemy of common coral everyday.

I am personally deeply moved by the fact that the coral that I am so attached to has spawned.

It was truly the greatest reward that can be obtained from a venture that deals with living creatures.

Of course, this research is only the first step in saving corals.

However, I believe it is a big step for an environmental transfer startup.

We will not stop walking on this way over the success of the spawning, but will use this achievement for the benefit of coral, the ocean, and ultimately humanity.

We will continue to do our best to contribute to the Earth with "Japan Blue”.

Once again, I would like to thank everyone who has been involved with and supported our company to this point.

We would not have been able to do this without your support.

Thank you for your continued support of Innoqua!

3: Ministry of the Environment. Coral Reefs in Japan 1-1 Reef-building corals in Japan https://www.env.go.jp/nature/biodic/coralreefs/reference/mokuji.html

We are a startup company founded in 2019 by an aquarist who has one of the best coral breeding techniques in Japan and an engineer who was conducting AI research at the University of Tokyo.

Aquarists are who keep fish, shellfish, and even corals at home as a hobby. By combining the power of people who love nature and conduct research based on their curiosity together with IoT and AI technologies, we are researching and developing "environmental transfer technology" that can reproduce any aquatic ecosystem in an aquarium.

With the knowledge of people who love nature, we aim not only to protect nature but also to balance it with economic rationality, and we are a company that focuses on education and marine research platform businesses that utilize environmental transfer technology. 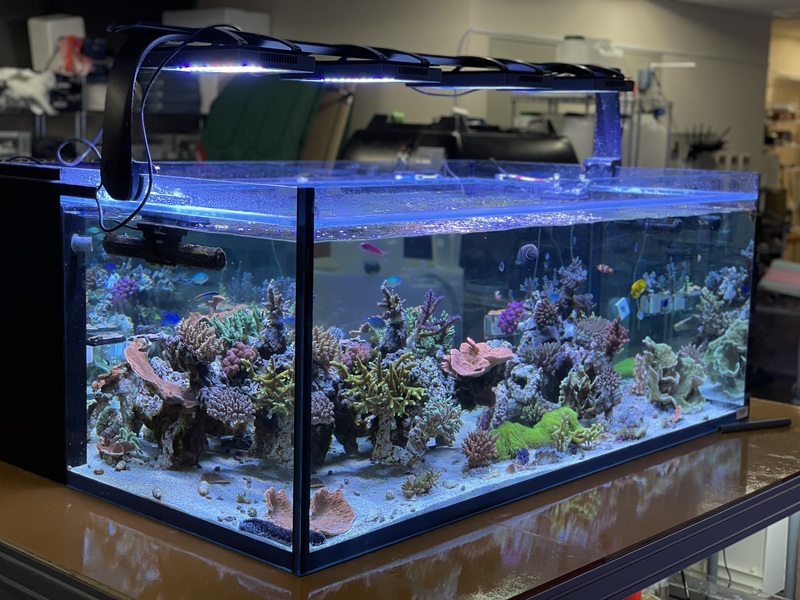 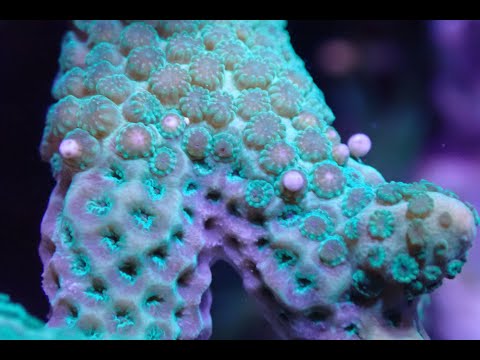