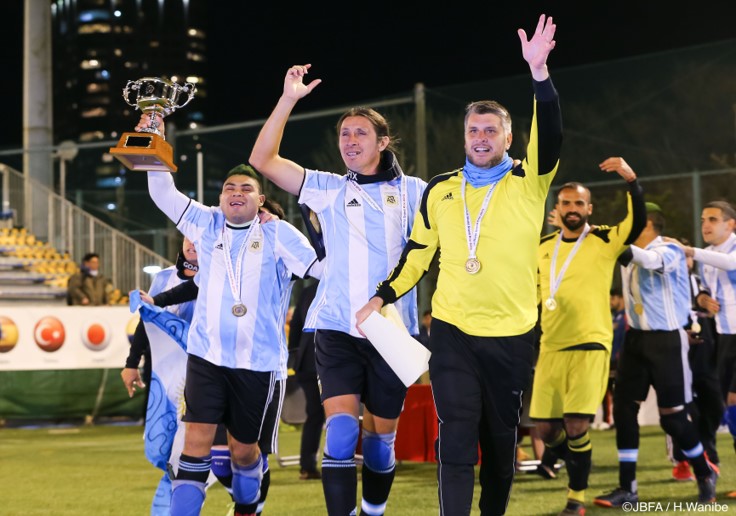 TANAKA Holdings Co., Ltd., holding company of TANAKA Precious Metals (TANAKA Kikinzoku Group) globally participated as a Category Sponsor in the IBSA Football World Grand Prix 2019, which was held from March 19 to 24 in the Japanese capital under the auspices of the International Blind Sports Federation (IBSA) and the Japan Blind Football Association (JBFA).

TANAKA Holdings has been serving as a partner of the JBFA, an incorporated non-profit organization, and a corporate sponsor of Japan’s women’s national blind football team since 2017 to help raise awareness about blind football and spread the sport.

As the IBSA Blind Football World Grand Prix was held for the second time after its inauguration last year, TANAKA Holdings again participated in the event as the Category Sponsor supporting ceremonial operations to provide medals, trophies and shields to teams and players in order to contribute to further development of blind football at home and around the world.

The IBSA Blind Football World Grand Prix was newly launched last year as a competition sanctioned by the IBSA with the aim of spreading blind football throughout Asia and the world at large. It will be held for three consecutive years until 2020. In this year’s event, eight countries in the world's top 20 rankings took part in the initial round-robin phase with the participants divided into two groups of four teams (Group A and Group B). On the final day of the Grand Prix on March 24, four matches were held -- the playoffs to decide the seventh, fifth and third places as well as the final.

Colombia beat Russia for seventh place and Turkey beat Thailand for fifth place. In the third-place playoff, Japan narrowly lost to Spain to finish fourth. In the final, England and Argentina faced off in a repetition of last year’s deciding match, and Argentina emerged victorious for the second time. At an ensuing award ceremony, prizes were presented to teams and players.

About the TANAKA Precious Metals

Through its endeavors as precious metal professionals, the TANAKA Precious Metals will continue contributing to the development of a comfortable and affluent life.