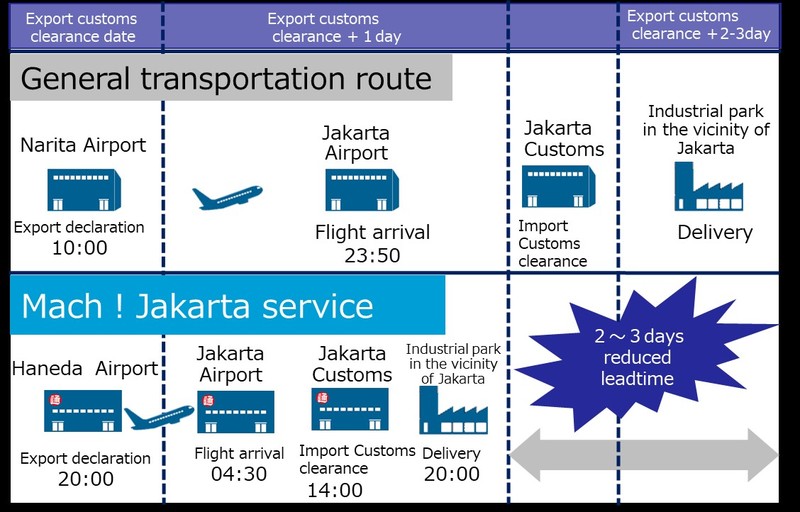 - Next-day Arrival in Jakarta from Various Parts of Japan -

Nippon Express Co., Ltd. started offering NEX-SPEED Mach! Jakarta, a high-speed air transportation service to Jakarta, Indonesia, from Japan on Friday, November 1, combining the convenience of its own base at Haneda Airport and a flight departing from Haneda Airport at midnight.

"NEX-SPEED Mach! Jakarta," the service delivers cargo commissioned at Haneda Airport by 19:00 to the suburbs of Jakarta by the following day using a midnight flight to Jakarta from Haneda.

Nippon Express is the only forwarding company with an operational base ("shed") inside Haneda Airport handling both domestic and international cargo, enabling it to sort international cargo arriving at the airport via domestic flights and then load the cargo straight onto international flights. After arriving in Jakarta, PT. Nippon Express Indonesia carries out its own import customs clearance and domestic delivery. Its in-house operations of both departure and arrival have reduced the lead time by two to three days compared with the company’s previous service.

In Indonesia, a large number of Japanese companies have advanced into an industrial park in the vicinity of Jakarta, and Nippon Express has developed the new service to meet the needs for emergency transportation of parts, prototypes, factory equipment, and other items from Japan.