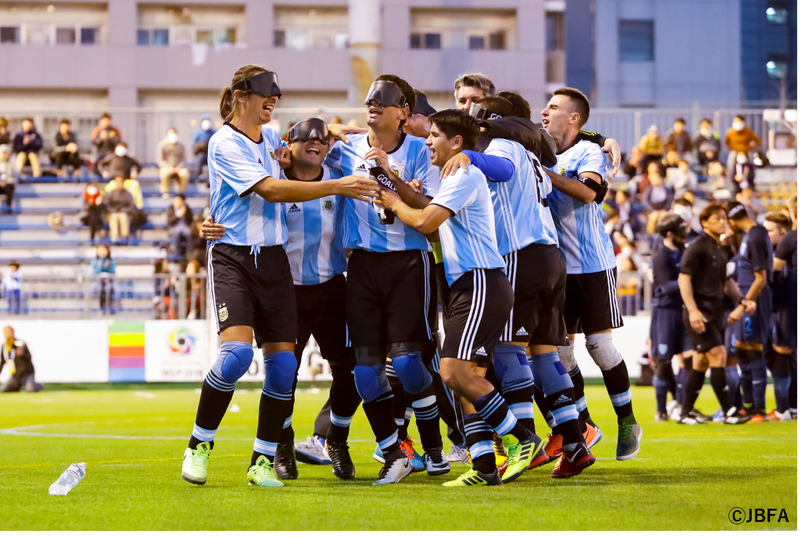 Tanaka Holdings Co., Ltd., the Tanaka Kikinzoku group’s holding company headquartered in Tokyo, participated as a Category Sponsor in the IBSA Blind Football World Grand Prix 2018, which was held from March 21 to March 25 under the auspices of the International Blind Sports Federation (IBSA) and the Japan Blind Football Association (JBFA).

Tanaka Holdings has been supporting activities of the JBFA since 2017 as one of its partners and a corporate sponsor of Japan’s women’s national blind football team to help raise awareness about blind football and spread the sport.

In this inaugural 2018 version of the IBSA Blind Football World Grand Prix, Tanaka Holdings participated as the Category Sponsor to support ceremonial operations and provide medals, trophies and shields to teams and players in an effort to contribute to further development of blind football at home and around the world. It also presented gifts of honor to teams that took part in Development Games, wishing for their future success. This international competition was simultaneously held to help strengthen developing teams.

The IBSA Blind Football World Grand Prix was newly organized this year as an event sanctioned by the International Blind Sports Federation with the aim of spreading blind football throughout Asia and the world at large. In this inaugural event, six countries in the world’s top 16 rankings took part in the Elite Class competition. The six countries were divided into two three-team groups, Group A and Group B, to play in a preliminary round-robin phase. The third-placed team from each group moved into the fifth-place playoff. The second-placed teams clashed for third place and the top-placed teams advanced to the final. The final and the third-place playoff were held on March 25, the last day of the Grand Prix. Turkey (2nd in Group A) beat Russia (2nd in Group B) for third place and Argentina (top in Group B) overcame England (top in Group A) to dazzle with the inaugural title. At an ensuing award ceremony, prizes were presented to teams and players. Separately, on the penultimate day of the Grand Prix, Japan defeated France to finish fifth.

About the Tanaka Kikinzoku group

Through its endeavors as precious metal professionals, the Tanaka Kikinzoku group will continue contributing to the development of a comfortable and affluent life.