Nearly 20,000 Dancers Gather at Kochi “Yosakoi Festival,” Many from U.S., Europe and Asia

The Kochi Prefectural Government hosted the “Yosakoi Festival,” one of Japan’s most celebrated festivals, on August 9-12 in the heart of Kochi City. Approximately 18,000 dancers in 207 teams, including those from the United States and elsewhere abroad, flocked to the 66th dance festival this year. Garbed in colorful costumes, they danced their heart out as they paraded through the Pacific coast city, making noise with traditional “naruko” wooden clappers in their hands.

The rules of Yosakoi require dancers to march forward holding “naruko” clappers in their hands as well as incorporating phrases from “Yosakoi Bushi,” a famed local folk song, into their dance music. Otherwise, they can dance their own way. Anyone anywhere in the world can participate in Yosakoi, which combines energetic group dance performances with a variety of lively music. It has spread to 29 countries and areas, spawning teams of dancers to perform at events and on other occasions.

The Kochi Prefectural Government established a system in 2016 to certify “Yosakoi Ambassadors,” assigning them to spread Yosakoi in their own countries, as well as supporting their activities with the aim of spreading the dance form further across the world. By the last fiscal year, 56 people in 16 countries were certified as Yosakoi Ambassadors. Three teams from London (Britain), Prague (the Czech Republic) and Budapest (Hungary) have been newly certified this year.

For this year’s Yosakoi Festival, a Yosakoi Ambassador based in Canada took the initiative in forming a “Kochi Yosakoi Ambassador KIZUNA (Bond) International Team” with 39 participants from 17 countries and areas (Japan not included) in North America, Europe, Oceania and Southeast Asia. The Kochi Prefectural Government aims to recruit still more participants in the future and promote international exchanges through Yosakoi. 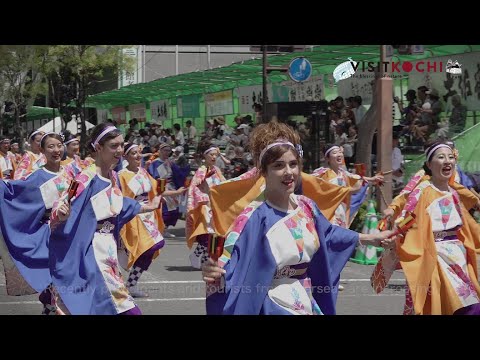 Nearly 20,000 Dancers Gather at Kochi “Yosakoi Festival,” Many from U.S., Europe and Asia