The center has selected 58 indicators to compare and verify the progress level of innovation of 60 countries. These indicators have been selected as they are considered to be contributing to the globalization and innovation.

The center announced details of these 58 indicators, rankings and scores of 60 countries, and recommendations based on the analysis results.

Points of this Release

▶ In the future, rankings will be created and published every year

The Center for Global Innovation Studies (GIC)(Director Professor Heizo Takenaka) was founded in January 2016, with the goal of promoting the study of global innovation. Its mission is the advancement of research on innovation theory and methodology that impacts diverse systems within today’s global society.

One is globalization in political and economic sphere and another is technological innovation led by cyber technology. Those dramatic changes may necessitate the effective tools to measure those changes from dramatic and common standpoints.

We strongly expect that the GII may contribute to the measurement and international comparison on policy implementation and cooperate management from the view point of globalism and innovation.

The center has selected 58 indicators, including productivity per worker, the number of patent applications, and the number of technical experts in R&D to compare and verify the progress level of innovation of each country. These indicators have been selected as they are considered to be contributing to the growth of GDP per capita in the long term. In actuality, there has been found a high correlation between the past growth rates and the rankings based on the index.

And, these indicators have been grouped into five categories, International Harmonization, Market, Technology, Human Power, and Policy, and also into 18 subcategories to be able to make categorical comparison from country to country.

Data collection targeted 216 countries and regions. Of the 58 indicators set by the Center, 60 countries were able to collect data for 53 or more indicators.

The data collection year is as close as possible to 2018, depending on the country and the nature of the data, the previous year’s are sometimes used. In addition, data on countries not included in the international statistics are collected by our Center as for major countries.

①Items that do not seem to have an impact on innovation due to the population size of the country were relativized by dividing the data value by the population. (New business registrations, etc.)

②The data was reversed for the item whose data value is the opposite for the innovation power. (National burden ratio, etc.)

③In addition, the deviation value which the data value of the country was calculated, and the items that seemed to have a large impact on innovation were doubled in weight and ranked.

（5）for detailed analysis on 5 major countries

In the analysis of this ranking, in the international comparison of globalization and innovation, five countries, including Japan, the United States, China, Germany, and Singapore were noted. By selecting Germany from Europe and Singapore from Asia, in addition to the major countries in the United States and China. We made it possible to make a more detailed international comparison of innovation progress.

Singapore, the Grand Duchy of Luxembourg, Switzerland, New Zealand and Iceland are all small countries. This is because, when measuring innovation, there are items calculated as per capita numbers (relative values) rather than national scale. On the other hand, absolute values are used for items that emphasize scale. For this reason, the United States is ranked 9th, the UK is ranked 10th, and China is ranked 15th.

Japan's overall ranking was 32nd out of 60 countries. In the G7 countries, it was the sixth in the seven countries following the United States (9th), the United Kingdom (10th), Canada (17th), Germany (20th) and France (24th).

In this way, the power of globalization and innovation is inferior to the third-largest economy in the world of GDP because, in our five areas, Human Power and International Harmonization are particularly low. On the other hand, Technological Innovation shows relatively good figures. The following is an evaluation of Japan's score by taking up representative indicators.

Due to the declining birthrate and aging population, the proportion of young people in the working-age population is the lowest among the 60 countries (60th), indicating “youth of the population”, which is far below other countries.  In addition, students' entrepreneurship is almost the lowest (42nd) out of 43 countries where data was obtained.

Although there are no markedly low numbers or items, the number of R & D engineers is inferior to China or the United States.

Although there are no markedly low numbers or items, the venture capital investment is slightly lower than the average, it is only 22nd out of 34 countries where data was obtained.

Comparing the five major countries such as Singapore, the United States, Germany, China, and Japan, Singapore, which ranks first in the overall ranking, has a well-balanced score for each item. On the other hand, China and the United States show outstanding scores in Technological Innovation. This is a result of using absolute values such as the number of R & D engineers and the amount of R & D investment, but it shows a technological advantage that greatly defines innovation power.

Singapore is high, Japan is low. International Harmonization is necessary for small countries such as Singapore to tackle innovation, especially notably the reduction rate of greenhouse gas reduction compared to 1990. On the other hand, this low score in Japan is likely to hinder the development of Japanese innovation power.

Singapore and labor productivity are high, and the value of venture capital investment is 86.4.

China is prominent in the number of R & D engineers, followed by the United States, which has a very high number of patent applications and is in a dominant position. Japan outperforms Germany in terms of the number of patents and royalty income such as intellectual property rights.

The percentage of young people in the working-age population is low, indicating the “population youth” with a declining birthrate and an aging population, and the scores for diversity such as women and immigrants are all very low.

Singapore has a higher score than other countries in terms of financial condition and tax system. China has a low score for dealing with corruption and political stability. 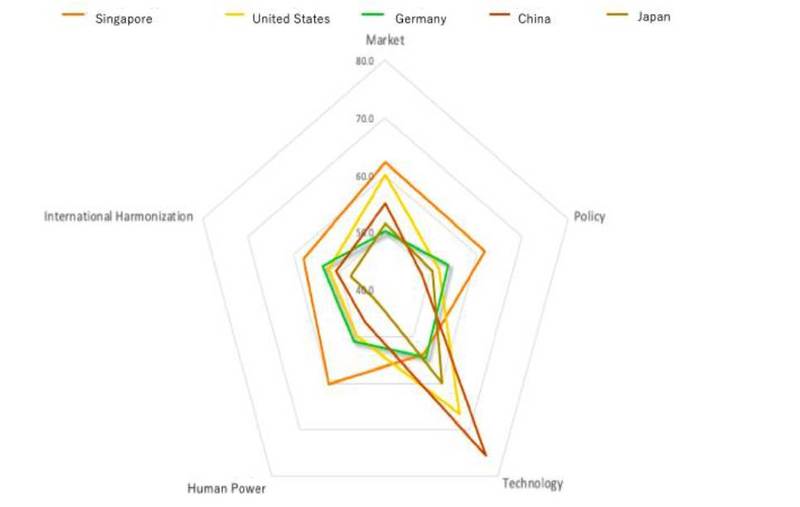 From this chart, it can be seen that Singapore is a well-balanced point, the United States and China are outstanding points in technology, and Japan has a particularly low Human Power. 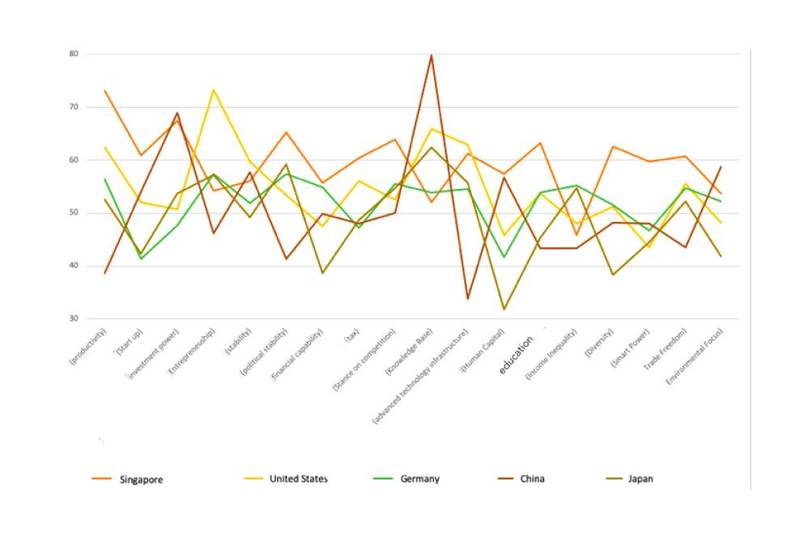 It can be seen that American entrepreneurship, Chinese knowledge base are outstandingly high, and Japanese human capital is low.

4. Comparison with other rankings 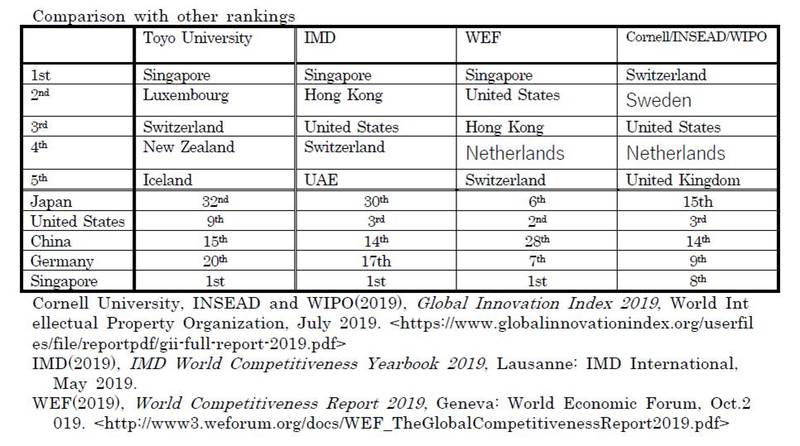 Japan’s “Human power” is ranked very low, 57th out of 60 countries. Among them, International migrant stock (% of population). Total Inbound internationally mobile students in tertiary education, female share of employment in managerial positions (%), share of students who want to work in their own business, and World University Rankings 2019 by subject: engineering and technology, these are crucial issues for Japanese policy. 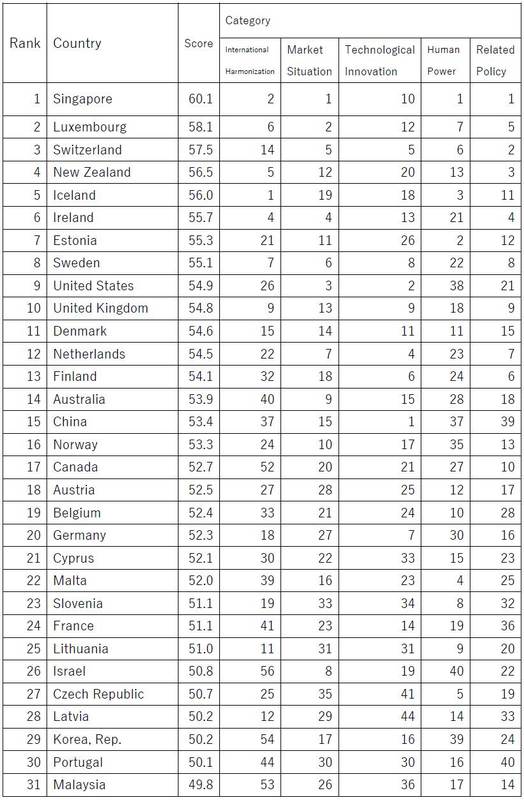 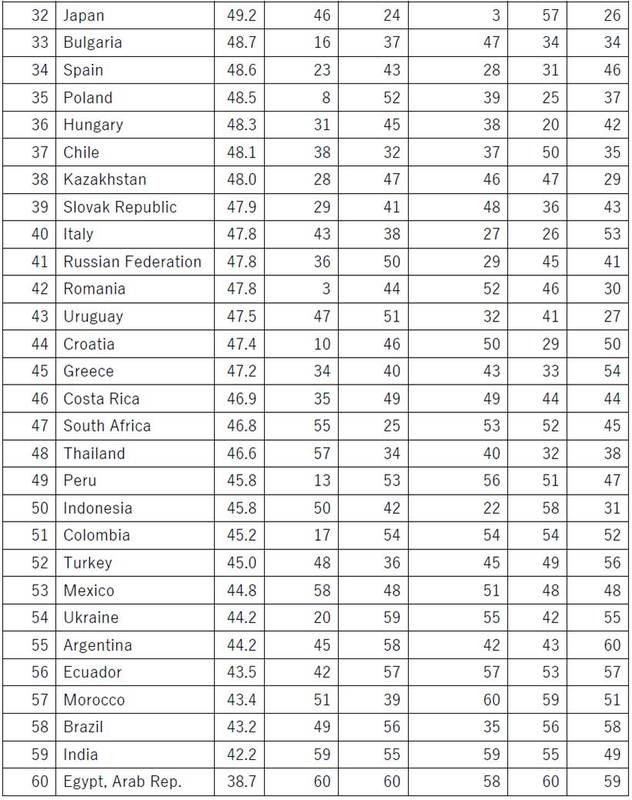 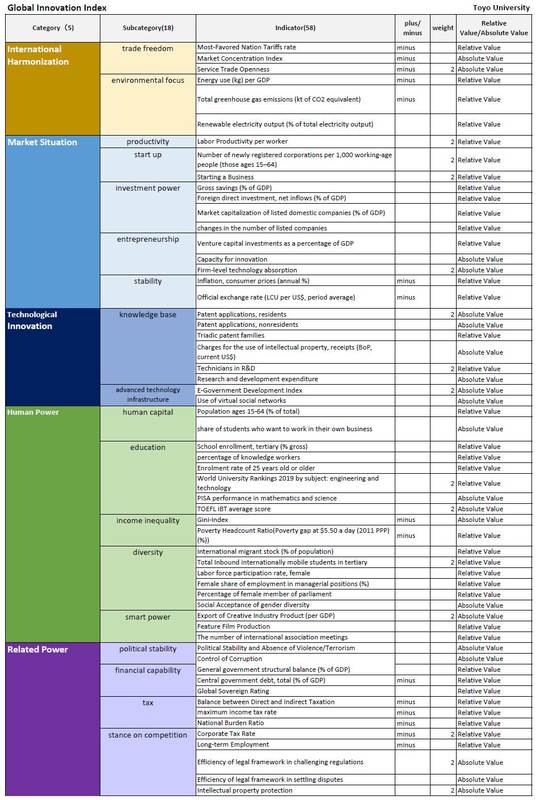