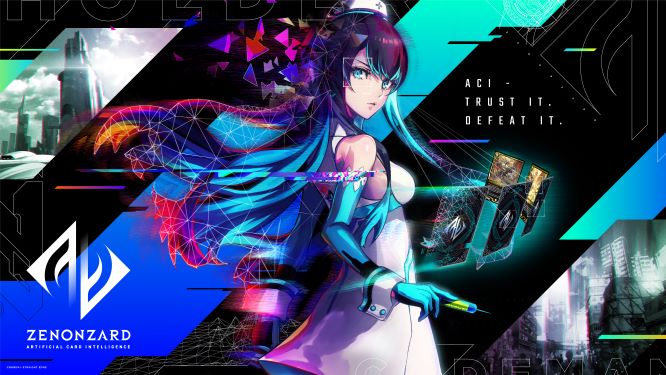 BANDAI CO., LTD. announced on March 17 that its Card Business Division will release “ZENONZARD: Artificial Card Intelligence,” a digital mobile card game utilizing a specialized artificial intelligence, in 56 countries and regions around the world in May 2020.

Zenonzard is a new style of card battle game, featuring a specialized AI developed by HEROZ Kishin, an artificial intelligence leader in Japan. Dubbed “ACI” or “Artificial Card Intelligence,” this technology is different from its pre-defined pattern-based predecessors, with one in-game variation boasting an astounding 99.26% win rate over players in Japan. Zenonzard also provides players with their own ACI assistants, who will learn and grow as they battle, adding a refreshing new element to the genre.

Players will be offered a choice of “Buddy AIs” from a colorful cast of characters called as “codemen.” These codemen will give players advice during battles, offering their input on everything from card choice to offensive and defensive strategies, allowing players to learn the gameplay. Codemen can also be consulted when constructing decks or when replaying past matches through battle reports, so even the newest of card game fans will feel at ease with the ACI.

Pre-registration will begin in early April 2020 and a special Zenonzard Campaign will be held at select trading card shops in the United States. Visit a participating store to receive an exclusive booklet featuring all kinds of information about the game, as well as a real card sleeve.

BANDAI CO., LTD. is the manufacturer across multiple categories, including Toys, Vending, Life style product and toy licensee of some of the most popular brands in toys and animation, interactive entertainment in Japan.

*Any inquiries about this press release should be made to Ambition Co., Ltd.

*Game images are from the pre-released version of the game and as such are subject to change without prior notice.

*Information found in this press release is from March 17th, 2020. Details described here are subject to change without prior notice.