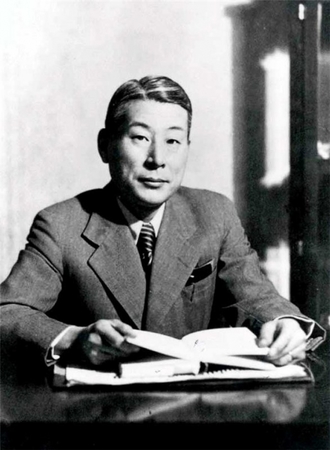 The Embassy of Lithuania in Japan and Waseda University will be hosting the online event “The Humanitarian Legacy and Lessons of Sugihara Chiune” on Wednesday, December 9, 2020. This event will celebrate the 120th anniversary of the birth of Sugihara, who was a diplomat that helped Jews escape from Nazi Germany during World War II by issuing transit visas to Japan.

Organized by the Embassy of Lithuania in Japan and Waseda University

1. Opening by the President of Waseda University Professor Aiji TANAKA

3. Video: “Virtual excursion at the Sugihara Museum in Kaunas”

Sugihara Chiune has been famously referred to as the "Oskar Schindler of Japan." In 1918, he enrolled in the First English Preparatory Program at Waseda University’s Advanced Teacher’s College. The following year in 1919 saw Sugihara withdraw from Waseda University to study abroad at the Nichiro Kyokai Gakko (Russo-Japanese Association School) on a government scholarship. This would eventually lead to a career in the diplomatic services. During World War II, he was appointed to serve in the Japanese Consulate of Kaunas in Lithuania. Extremely moved by the desperate plight of Jewish refugees escaping from the persecution of Nazi Germany from across Europe including Poland, Sugihara issued thousands of transit visas to Japan to those who were able to see him against the orders of his own Ministry of Foreign Affairs. His actions are estimated to have saved the lives of over 6,000 people. At the Waseda Campus, a monument stone depicting Sugihara’s visage in bronze relief was unveiled on the lawn between Buildings No. 11 and No. 14 on October 24, 2011, in remembrance of his actions. The monument was made possible through the generosity and efforts of the Tomon Sugihara Chiune Kensho-kai (Alumni Association Honoring Sugihara Chiune). Sugihara’s own words are inscribed on the granite monument and serve as a poignant message to be read by generations of students passing through the gates of Waseda University. The inscription reads, "I made the decision I made not as a diplomat, but as a human being. I did what I believed was just and right."

The Humanitarian Legacy and Lessons of Sugihara Chiune