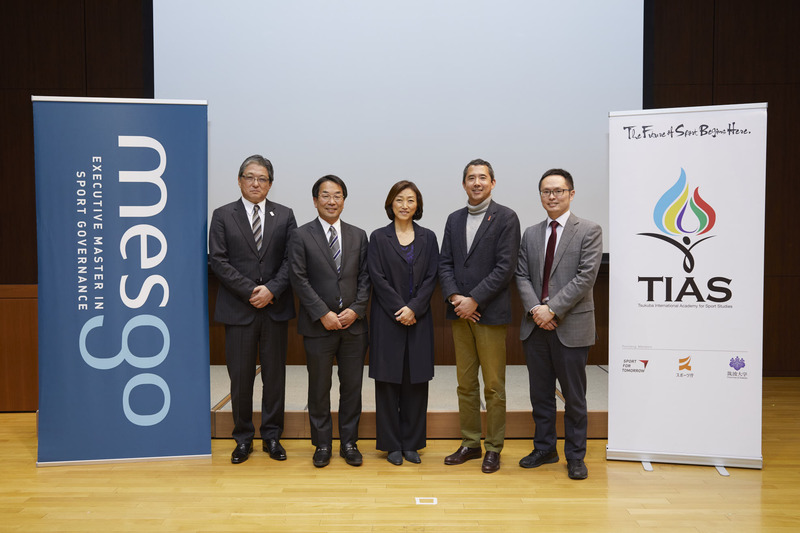 - Lively Discussions on “Future of Sport” by Distinguished Representatives of Domestic and Global Sport Scenes; Session Spanning across 9 Cities to Culminate in Tokyo -

On Tuesday, 6 March, Tsukuba International Academy for Sport Studies (TIAS) held a joint seminar with the Executive Master in Sport Governance (MESGO), Europe’s leading sports management programme, including lectures and discussions on the future of sport.

MESGO, a master’s programme for sports management operated primarily by the Union of European Football Associations (UEFA), comprises nine sessions each in a different location. Each session being held in one of nine different cities around the world, Session 1 was held in September 2017 in Paris, and the ninth and final session was held in Tokyo. Having partnered with MESGO in September 2016, TIAS provided full cooperation in the hosting of the final session.

Taking the podium at the session held on 6 March at the University of Tsukuba Tokyo campus were University of Tsukuba Professor and TIAS Chairman Hisashi Sanada and key figures giving impetus to both domestic and international sports scenes, including Yoko Fujie, Director-General of Japan Sports Agency; Shinichiro Otsuka, Vice President of the International Triathlon Union; Masaki Sakaida, Executive President of the Japan Basketball Association; Oliver Takahashi, Tokyo 2020 Olympic Games General Manager of Coca-Cola (Japan) Co.; and Miyako Tanaka-Oulevey, IOC Commission member of Marketing and an athlete committee member of the International Swimming Federation (FINA). They engaged in discussions with the programme participants of TIAS and MESGO. Representatives of sports-related organisations and corporations also attended the event, deepening the significance of the deliberations on the current issues as well as the future of sport.

In his opening remarks at the seminar, Prof. Sanada expressed his great gratification at the fact that it was the first session by MESGO to be held in Japan, particularly in light of the tremendous efforts that the University of Tsukuba has made to contribute to the modern development of sport education in Japan. “I hope that through sports promotion and development, we can make a worldwide contribution,” he said.

In her keynote address, Fujie of Japan Sports Agency introduced the Sport for Tomorrow project promoted by the Japanese government. “When we consider the future of sport, which is also the theme of today’s event, we can see that universities and other academic institutions will play a crucial role in terms of their ability to promote sports based on scientific analysis and in terms of the societal role they play,” she said. “This is why I think that opportunities for interaction like the one presented by this session are deeply significant.”

Otsuka of the International Triathlon Union began the subsequent panel discussion titled “Challenges of Japanese Sport in the Future” by introducing the contents and techniques that have helped expand the domestic and international triathlon markets. He went on to touch on the results of efforts to improve water quality at competitive swimming venues as part of the overall initiative toward sustainability: “I hope that through these improvements in water quality, competitive swimming areas can subsequently become places where local children can enjoy ocean swimming. The need for this is especially great in Asia.” In this way, he expressed his desire to make a contribution to society through sports.

The next speaker, Sakaida of the Japan Basketball Association, spoke from a practical standpoint as he explained how the B.LEAGUE was formed by merging two separate leagues. He described efforts that brought about a great increase in sales through incorporation as a business and the application of big data. He also told of his hopes for future achievements through the extension of these ideas: “In the universities as well, the promotion of partnerships among schools and data sharing can help give rise to a new university sport industry. Also, partnerships between major universities and their regional counterparts, as well as with local governments and B.LEAGUE clubs, can help revitalise regional economies.”

Takahashi of Coca-Cola (Japan) Co. referenced his company’s many years of involvement in the Olympics as he spoke about how important it is to plan from a long-term perspective. He introduced the kinds of know-how that only a global corporation can develop, adding that the knowledge and experience gained at the Tokyo 2020 Games must be conveyed to the Beijing and Paris teams as soon as the Tokyo 2020 Games draw to a close. “More than 60 companies will be participating as partners in the Tokyo 2020 Games but our aim is to keep from being regarded merely as ‘one of them.’ Instead, we strive to be ‘the only one’ in part through continual, thorough deliberation.”

The final speaker to take the podium, Tanaka-Oulevey, the IOC Commission member of Marketing and an athlete committee member of FINA, related her experience in becoming an Olympic medalist in the synchronised swimming competition. “An excellent athlete may manage to achieve medals and fame but that can only last from a few years to about a decade at most,” she said. “Through an athletic career, one can learn many business skills which can then be applied in areas other than sport. However, in fact, there are many times when it’s difficult to know what to do and how.” In relating her own experiences, she touched on the crucial nature of career programmes for athletes and presented her hopes for the future development of such programmes.

The session included presentations by TIAS and MESGO programme participants as well. Five mixed teams were formed with members of TIAS and MESGO and the remaining session time was spent in lively question-and-answer activities and discussions.

(Photo3: Scenes from presentations and discussions by TIAS and MESGO programme participants

Formed in 2009 primarily by the UEFA, the Executive Master in European Sport Governance (MESGO) is an educational institution that provides 9 one-week sessions of an executive-level sports management programme. The aim of the programme is to elevate participants’ skills through mastery of the intricacies and diversity of international practices related to professional sports governance. The programme is designed for decision-makers in the sport sector such as heads of divisions of sports organisations or board members wishing to master the complex dimensions and diversity of international practices related to professional sport worldwide. For more details, please visit at: http://www.mesgo.org/.

As part of the Sport for Tomorrow programme put forward by Japan's central government to further the sport and Olympic/Paralympic movement, TIAS has full government support. The University of Tsukuba, the parent organisation of TIAS, has been the driving force behind the Olympic movement in Japan, which dates back more than a century to Jigoro Kano, the first Asian member of the International Olympic Committee (IOC) and chairman of the school that was the forerunner of the University of Tsukuba. In anticipation of the 2020 Olympic and Paralympic Games, TIAS is offering wide-ranging studies, encompassing Olympic and Paralympic education, including the state of the art in sport management, teaching and coaching, as well as interaction with select scholars from around the world. For details, please visit us at: http://tias.tsukuba.ac.jp/.

TIAS Releases Final Report on Project to Support Formation of Sport Academy as Part of “Sport...

University of Tsukuba/TIAS to Partner with IOC, Engaged in Talks for Joint Projects ...