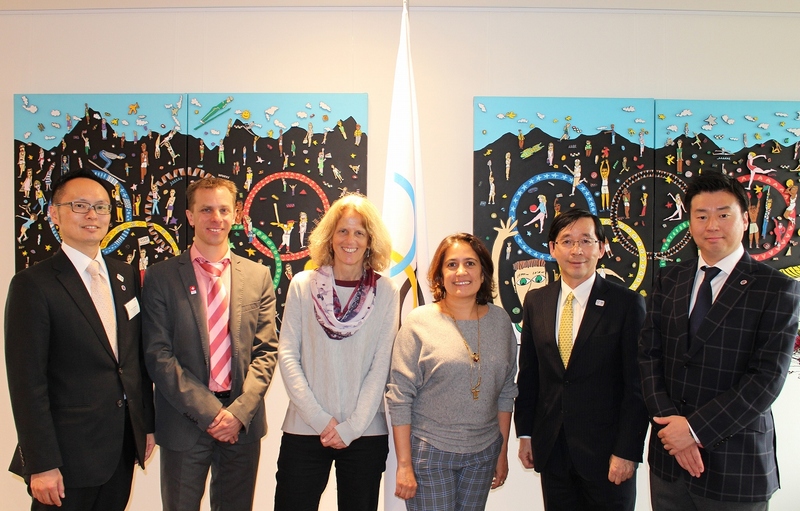 University of Tsukuba/TIAS to Partner with IOC, Engaged

in Talks for Joint Projects in Advance of Tokyo 2020 Games

Tsukuba International Academy for Sport Studies (TIAS), affiliated with the University of Tsukuba, held talks on 11 April in Lausanne, Switzerland, in preparation to enter into a partnership agreement with the International Olympic Committee (IOC) in advance of the hosting of the Tokyo 2020 Games. TIAS and the IOC are now jointly engaged in final preparations for the partnership.

In recent years, the question of what kind of Olympic legacy will be handed down by cities hosting the Olympic and Paralympic Games has become a matter of crucial concern. Debate has been deepening over the issue of whether the IOC will generate a legacy through Olympic hosting, and whether it will be conveyed to the next generation. TIAS was established as part of the Japanese government’s programme “Sport for Tomorrow” to help popularise sports and the Olympic/Paralympic movement in the run-up to the 2020 Tokyo Games. The academy welcomes leading scholars from around the world and provides them with opportunities to engage in advanced Olympic studies at the highest level in the world, helping develop and foster human resources for the future. Thus, TIAS is clearly in a position to help create a unique Olympic legacy that is Japan's own.

TIAS also will undertake Survey Research on the Olympic Legacy with the IOC. This joint research project will focus on Japan's previous Olympics in Tokyo (summer 1964), Sapporo (winter 1972) and Nagano (winter 1998) in order to gain insight into creating a post-2020 Olympic legacy.

“By partnering with the IOC to conduct this research, we will be conveying Japan's Olympic research to the world,” said TIAS Chairman Hisashi Sanada, expressing his hopes for the partnership with the IOC. “This will lead to a heightened presence for Japan in the international sport community.”

Furthermore, TIAS was in charge of coordinating a basic agreement on the pre-Olympic camp among the Swiss Olympic Association, University of Tsukuba, Ibaraki Prefecture and City of Tsukuba, which was signed on 11 April in Lausanne. For the details of the ceremony for the basic agreement on the pre-Olympic camp, please visit: https://kyodonewsprwire.jp/attach/201804173031-O1-6bNVJi49.pdf

About the Centre for Olympic Research and Education (CORE)

The Centre for Olympic Research and Education (CORE) was established by the University of Tsukuba as an Olympic educational platform in commemoration of the 150th anniversary of the birth of Jigoro Kano. As Principal of Tokyo Higher Normal School, the predecessor of the University of Tsukuba, Kano contributed to the development of physical fitness and sports in Japan. As the first member of the IOC from Asia, he worked to promote an international Olympic movement. While building up a wide-ranging body of research and educational work in the areas of physical fitness and sport science, the University of Tsukuba has also produced numerous Olympians and Paralympians among our current students and graduates, who have been active on the world stage. At CORE, we acknowledge this history as we work together with our 11 affiliated schools, as well as related organisations both domestic and overseas, in association with Japan's first IOC-approved Olympic Studies Centre to help promote Olympic education, research and practical activities. For details, please visit: http://core.taiiku.tsukuba.ac.jp/en/.

As part of the Sport for Tomorrow programme put forward by Japan's central government to further the sport and Olympic/Paralympic movement, TIAS has full government support. The University of Tsukuba, the parent organisation of TIAS, has been the driving force behind the Olympic movement in Japan, which dates back more than a century to Jigoro Kano, the first Asian member of the International Olympic Committee (IOC) and chairman of the school that was the forerunner of the University of Tsukuba. In anticipation of the 2020 Olympic and Paralympic Games, TIAS is offering wide-ranging studies, encompassing Olympic and Paralympic education including the state of the art in sport management, teaching and coaching, as well as interaction with select scholars from around the world. For details, please visit us at: http://tias.tsukuba.ac.jp/.

TIAS Releases Final Report on Project to Support Formation of Sport Academy as Part of “Sport...

University of Tsukuba/TIAS to Partner with IOC, Engaged in Talks for Joint Projects ...