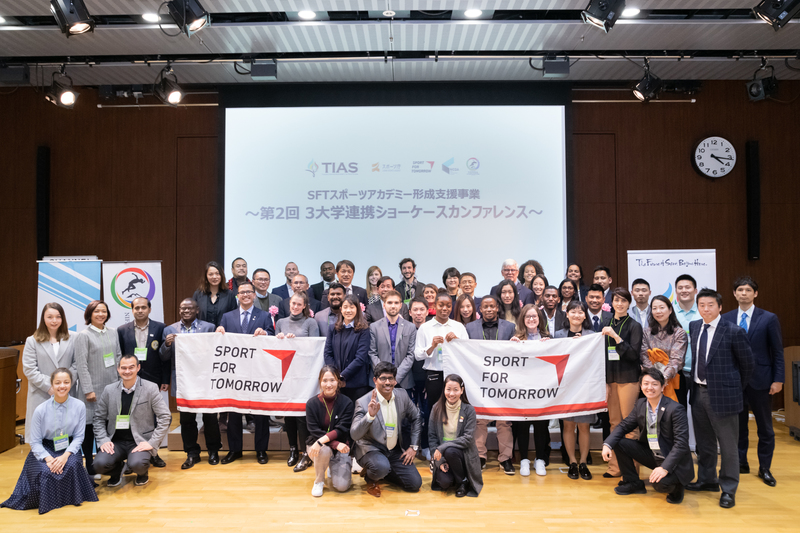 On December 10, the University of Tsukuba’s Tokyo Campus hosted the 2nd Tri-University Showcase Conference on the SFT Sport Academy Formation Project. The event was organized by Tsukuba International Academy for Sport Studies(TIAS), together with the National Coach Developer Academy(NCDA) at Nippon Sport Science University, and the NIFS International Sport Academy(NIFISA) at the National Institute of Fitness and Sports(NIFS).

Founded as part of the Sport for Tomorrow programme, introduced by the Japanese government to promote the Olympic and Paralympic movements, TIAS is Japan’s first international sporting academy, welcoming students from around the world as part of its efforts to cultivate the next generation of global leaders in the field of sport. NCDA specializes in the development of top-level coaching professionals within Japan, while NIFISA trains young coaches from around the world.

Over 100 attendees heard speeches from Yoko Fujie, Director General of the Japan Sports Agency; Dr. Tania Braga, Head of Legacy with the International Olympic Committee; Prof. Joon-ho Kang, Director of Seoul National University’s Dream Together Master Program; and John Bates, President of the International Council for Coaching Excellence. There were progress reports on the three institutions’ activities since the project’s launch, along with discussion on key topics and challenges en route to creating a Japan-based centre for the development of global sporting personnel.

Dr. Tania Braga voiced her hopes for Tokyo 2020: “(As the first Olympic Games since) the IOC Legacy Strategic Approach was approved in August 2017, Tokyo 2020 is a pioneer (in the monitoring and reporting) of legacy, so I hope we will have good results to see. The legacy vision needs to be clear through the whole life cycle from planning a city’s candidacy to the end of the Games.”

Based at the University of Tsukuba, Tsukuba International Academy for Sport Studies (TIAS) was founded in 2014 with the backing of the Sport for Tomorrow programme, introduced by the Japanese government to promote sport, along with the Olympic and Paralympic movements. The academy’s Master’s Programme in Sport and Olympic Studies aims to cultivate the next generation of leaders in the field of global sport. http://tias.tsukuba.ac.jp/