An international research group led by Senior Professor Kazuma Nakazawa and Postdoctoral Fellow Masahiro Yoshimoto (Graduate School of Education and Engineering, Gifu University), Assistant Professor Junya Yoshida (Graduate School of Science, Tohoku University) and Professor Toshiyuki Takahashi (Institute of Particle Physics and Nuclear Studies (IPNS), High Energy Accelerator Research Organization (KEK)) has observed of a novel hypernucleus called the Xi nucleus. The Xi nucleus contains a Xi-minus particle (i.e. negatively charged Xi particle) 1) with two strange quarks 1) (Fig. 1). This Xi nucleus was produced in the Japan Proton Accelerator Research Complex (J-PARC) E07 experiment. The event has been named the Irrawaddy event after the majestic river in Myanmar, the home country of the Gifu University student who detected it. Analysis shows that the Irrawaddy event was produced by the strong attraction (i.e. high binding energy) between a Xi-minus particle and a nitrogen-14 nucleus. Further analysis indicates that the binding energy was five times that of an event announced by the present research group in February 2021 (the Ibuki event [*]). The Irrawaddy observation confirmed the attraction between the Xi particle and the nitrogen-14 nucleus due to the ‘strong interaction’ 2) (i.e. nuclear force), which is much stronger than the electromagnetic interaction (i.e. Coulomb force). Furthermore, successful observation of the inner level structure 3) of the Xi nucleus was achieved for the first. The discovery of the Xi nucleus was unexpected according to many current theories, and it is hoped that this discovery will lead to the development of a new theory in the future. Since strange-quark-containing hyperons 1) such as Xi-minus particles are thought to appear in the cores of neutron stars 4), which are the densest objects in the universe and are considered giant nucleus, the results of this research will play an important role in our understanding of neutron stars.

The results of this research were published in the online journal : Progress of Theoretical and Experimental Physics (PTEP) on 23rd July, 2021 at 17:00 (JST).

Figure 1. Micrograph and images of a new Xi nuclear event (Irrawaddy event) observed in a photographic emulsion sheet. A Xi-minus (三－) particle was absorbed by a nitorogen-14 nucleus at point A to form Xi nucleus, which decayed into two helium-5-Lambda nuclei (#1 and #2), a helium-4 nucleus (#3) and a neutron. The neutron is invisible on the micrograph because it has no electric charge. At points B and C, the two helium-5-Lambda nuclei decayed into two hydrogen nuclei each, as well as several uncharged particles, namely neutrons and neutral pions.

・The Irrawaddy event shows that the Xi-minus particle and the nucleus were in the most deeply bound s-state 3). This state, together with the Ibuki event showing the p-state 3), reveals the level structure inside the Xi nucleus.

The research team observed a novel event of the Xi nucleus (Irrawaddy event) in the J-PARC E07 experiment conducted at the J-PARC Hadron Experimental Facility. Detailed analysis reveals that this event was due to the binding of a Xi-minus particle to a nitrogen-14 nucleus at a very large energy of 6.27 ± 0.27 MeV. Like negatively charged electrons, Xi-minus particles are bound to positively-charged nuclei by the Coulomb force, however the Coulomb force acting alone could not generate a binding energy over 1 MeV. The observed event thus represents the formation of the s-state of the Xi-nucleus, which is even more strongly bound by the attractive nuclear force of the strong interaction with the nucleus in addition to action of the Coulomb force, than the previously detected p- and d-states of Xi nuclei. Taken together, these results reveal the level structure of the Xi nucleus, as seen in Figure 2, and specify the magnitude of the attractive force due to the strong interaction.

The Xi nucleus decays via a reaction in which a Xi-minus particle reacts with a proton in the nucleus to convert it into two Lambda particles 1). If the likelihood of this conversion reaction were higher, then the nucleus would typically break down before the Xi-minus particles could enter the nucleus and form the Xi-nuclear state. Therefore, the existence of Xi nuclei also implies a relatively low likelihood for the conversion reaction. 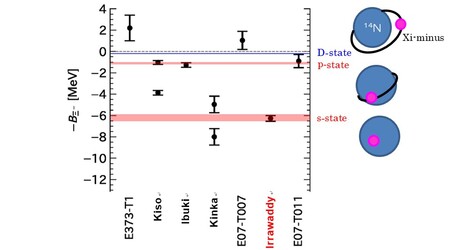 Figure 2. Schematic diagram of the binding energy (B三-) between the Xi-minus particle and the nitrogen-14 nucleus (14N) and the corresponding states in the Xi nucleus measured thus far. The singly measured B三- value for both the Irrawaddy and Ibuki events allows two different B三- values of the Kinka and Kiso events to be interpreted as s- and p-orbits, respectively. In the case of the nitrogen-14 nucleus, the d-orbit after s and p is denoted as a capital ‘D’ because electromagnetism is the dominant force in this case, with little influence from the strong interaction. As the level becomes shallower than the s-state, the distance from the Xi-minus particle to the center of the nucleus increases.

A Xi nucleus is a nucleus that contains a Xi particle added to the normal nucleus. Like protons and neutrons, which make up a normal nucleus, each Xi particle is made up of three quarks. A Xi particle includes two strange quarks and characteristically decays within about 10 billionths of a second. Hypernuclei, i.e. nuclei containing strange quark(s), do not naturally exist on the earth and their study leads to a deeper understanding of the mechanisms of nucleus formation. The study of hypernuclei, especially Xi nucleus, is also important for understanding neutron stars, which are regarded as giant nucleus with the size of celestial bodies. Neutron stars are ultra-dense objects formed after the supernova explosion of a star, and neutron star merging events have attracted much attention in recent years as a source of gravitational waves and heavy elements in the universe. To understand the properties of neutron star, such as maximum mass, radius, internal density and pressure, scientists must consider the conditions under which particles are produced in the interior of neutron stars including the Xi particles. Since the conditions for Xi particle production depend on the magnitudes of forces between a Xi particle and a proton or neutron, it is necessary to determine these magnitudes in earth-based experiments. Scientists have eagerly awaited additional experimental data on Xi nucleus for some time.

The event was named the ‘Irrawaddy event’ after the majestic river in Myanmar, the home country of the international student at Gifu University who led the microscopic search and discovered the event. Only a few Xi nuclear events have yet been observed, and it is customary for research teams to name each new discovery after a place associated with discoverer or with the institution that contributed to its discovery.

By revealing the level structure in the Xi nucleus, in which a Xi-minus particle bound, this study will lead to an understanding of how matter is formed from the elementary particles, called quarks. It will also bring us one step closer to understanding the internal structure of neutron stars, which are regarded as giant nuclei.

The research group responsible for the Irrawaddy event is now developing a new search method for Xi nuclei, called the ‘overall-sheet scan’ method. This method will facilitate the detection of Xi nuclei that the current searching method cannot identify. It is estimated that the number of Xi-nuclear events observable with the new technique will exceeded that of the present detection limit by an order of magnitude, thus exceeding those of past experiments’ detection limits by 2 orders of magnitude. The observation of many more Xi nuclei will allow us to measure the various types and energy states of Xi nuclei in a more systematic and precise way, while also elucidating the details of the strong interaction that acts on the Xi particle.

A baryon is a particle composed of three quarks, like a proton or a neutron. Some baryons other than the proton and neutron can be formed by considering the third quark, the strange ‘s ’ quark, in addition to the up ‘u ’ and down ‘d ’ quarks. A Lambda particle (composition of uds) contains a strange quark, whereas each type of Xi particle contains two strange quarks: Xi-minus (dss) or Xi-zero (uss). A baryon that contains any number of strange quarks is called a hyperon.

A meson is composed of a quark and an anti-quark. A negatively charged kaon K- ( ūs) is a meson which has a strange quark, where ū is an anti-quark of the up quark. The Xi-minus particle is produced along with a K+ (us) meson in the reaction of the K- beam with a proton in the diamond target.

This interaction is often called the ‘strong force’ or the ‘nuclear force’ and is one of the four elementary interactions in the universe, the others are weak, electromagnetic, and gravitational interactions. The strong force acts between quarks and forms a nucleon (i.e. a proton or neutron) from quarks or a nucleus from nucleons. The properties of the strong interaction are among the most important subjects in modern physics. Crucial keys to such questions are offered by measurement of the forces in the following interactions: hyperon-hyperon, hyperon-nucleon and hyperon-nucleus. Thus, hyperons and hypernuclei, which do not exist naturally on the earth and are produced only by using accelerator beams, are studied intensively at J-PARC and other accelerator facilities around the world.

The electrons in an atom are in orbits of fixed energy (K-shell, L-shell, etc.). The X-rays emitted from the excitation (the rise of its energy) of an atom thus have a fixed energy, since the electrons move between orbital state in a phenomenon called a transition. Similarly, the protons and neutrons in a normal nucleus occupy such states, called levels. The energy of the gamma rays emitted from an excited nucleus is determined by the transitions of proton or neutron between these levels. In nuclei, the levels are named s, p, d, etc., in descending order of binding energy, just as the shells are named K, L, etc., in the case of atoms. In this study, the levels of the Xi-minus particle have been observed in a Xi nucleus for the first time.

Neutron stars are the densest celestial objects in the universe, and are thought to be born in supernova explosions that occur in the final stage of the evolution of massive stars that are more than eight times the mass of the Sun. Neutron stars have the 1.5 - 2 times mass of the Sun, but their radius is only about 10 km, then their centers are extremely dense, reaching 1 billion tons per 1㎤, which corresponds to one spoonful, where such density is 5 to 7 times the density of normal nuclei. Neutron stars, as their name implies, are composed primarily of neutrons. At very high density areas, such as in the center, the energy of those neutrons becomes so high that the particle motion inside is calmer when they are converted to hyperons, which are even heavier particles than neutron. Thus, the hyperons should emerge. As the motion becomes calmer with this appearance, the pressure at the center decreases. Since the hyperon-nucleon and hyperon-hyperon interactions are attractive as in our experimental results, then even at lower densities, conversion to hyperons will occur, and the pressure will drop further. Then the heavier neutron star would not be able to support its own weight and would not be able to exist. Astronomers have found neutron stars with masses twice that of the Sun, which contradicts the attractive hyperon interaction and has become a major topic of debate, known as the ‘Hyperon Puzzle’.

The authors would like to thank MARUZEN-YUSHODO Co., Ltd.

( https://kw.maruzen.co.jp/kousei-honyaku/ ) for the English language editing.