HOKUSAI Presents a Riot of Demons

▶ Highlights of this Exhibition

Since ancient times, the Japanese have believed in the existence of demons, incorporated demons into everyday life, and lived alongside them. Demons frequently appear in myths, legends, performances, novels, manga, anime, games—creative works of many types. Demons are deeply rooted in Japanese hearts and are a major component in shaping the spiritual world of Japan. Demons also often appear in

ukiyo-e, which took their subject matter from classic literature and performing arts as well as from yomihon (novels), a new literary form that developed in the Edo period.

We hope you will enjoy the force generated by this gathering of demons as Hokusai depicted them!

◎   A total of approximately 145 ukiyo-e works related to demons by Hokusai and his students will be exhibited in the exhibition's first and second halves!

See Hokusai's imagination and brushwork in his depiction of Japan's various types of demons.

◎  This exhibition introduces demon-related works from the popular A Hundred Tales series of polychrome prints, illustrated block-printed books, and other sources to explore how Hokusai, with his prodigious genius, perceived and expressed demons.

◎  It also includes a rare brush-drawn painting by Hokusai being exhibited by our museum for the first time!

Hokusai has included the thunder drums, a traditional accompaniment of the Thunder God, but has added distinctive features of his own, including having the god grinning terrifyingly fiercely and riding not on a cloud but on a Raijū, a beast that descends from the sky with a thunderbolt. The result is a more tense, lean figure with greater power. 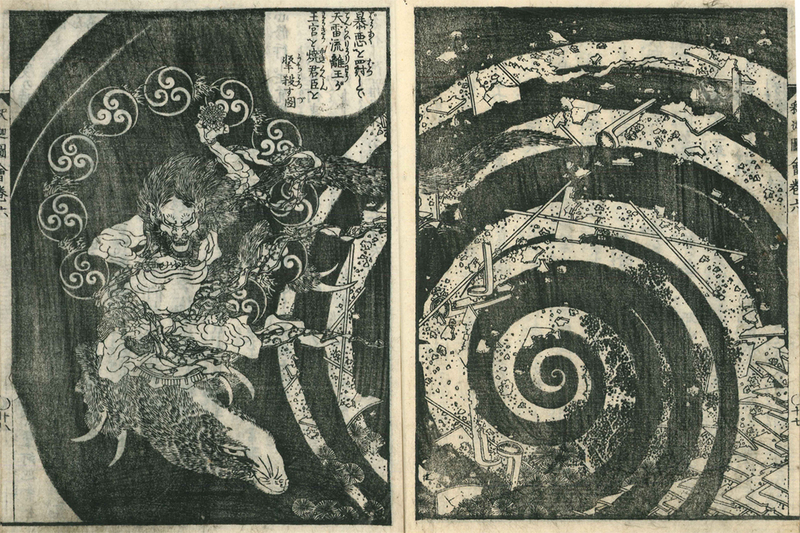 Katsushika Hokusai, The Thunder God, Applying Violent Punishment, Burns Down the Palace and Kills King Virūdhaka and His Vassal, from Life of Shakyamuni, Illustrated, Vol. 6, The Sumida Hokusai Museum (All term)

* We can provide you the free materials and images when you introduce our museum or exhibition with your media. Please send the attached "Request form for PR Images" to the Public Relations and Promotion Group e-mail address.

Request form for PR Images_HOKUSAI Presents a Riot of Demons.pdf

HOKUSAI Presents a Riot of Demons_flyer.pdf