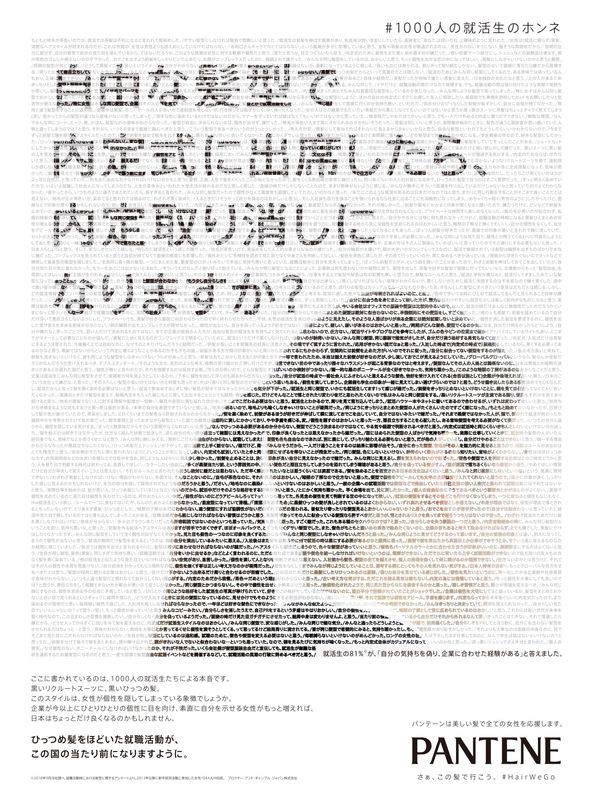 Pantene in Japan, a hair-care brand established in 1945 by Procter & Gamble (P&G) Japan K.K., has launched an advertising campaign to encourage students to show what they really are with confidence in job-hunting activities -- the first such campaign in Japan. The campaign has been triggered by the outcome of a survey showing 1,000 university students’ real intentions about job hunting.

Pantene in Japan, which has helped women create beautiful hairstyles, has learned from the survey that Japanese women face a serious challenge regarding their hairstyles. In Japan, there are regulations on hairstyles and dress standards for various occasions. The public tends to judge people by their appearances such as their clothes and hairstyles. Moreover, Japanese people are apt to avoid being out of place by following such rules, which is a customary practice deep rooted in Japan’s culture.

Such a strange custom of valuing uniformity is clearly reflected in Japanese students’ job-hunting activities. In particular, women tend to adopt standardized styles of clothes and hairstyles during job interviews. Specifically, they typically adjust their skirts to be of the same length as those of other students, put their hair together in a ponytail and pull their hair tightly back in accordance with the custom of valuing uniformity. They try to look similar as other applicants and suppress their individuality.

In response to the outcome of the survey, Pantene in Japan launched the advertising campaign -- based on its philosophy of encouraging women to take a step forward by helping make their hair beautiful -- to inspire as many job-hunting students as possible to be active in their own fields with confidence while more freely showing what they really are than before. The advertisement is carried on newspapers and at railway stations, including on hanging straps on trains, while its video version can be viewed on the YouTube.

Pantene in Japan is determined to support women’s aspirations to be active in society by helping make their hair beautiful.

“I feel that people in Japan tend to be trapped by stereotypical views on how women should behave, although such a situation has been improving in recent years, and that such views are reflected in students’ behavior in their job-hunting activities. Pantene is promoting the advertising campaign to help as many people as possible be active in their own fields while showing what they really are more freely than before by listening to what job-hunting students have to say and sending our message to them. Pantene hopes to help create a society in which both students and companies can work toward their goals while allowing students to show what they really are with confidence, including their clothes and hairstyles.”