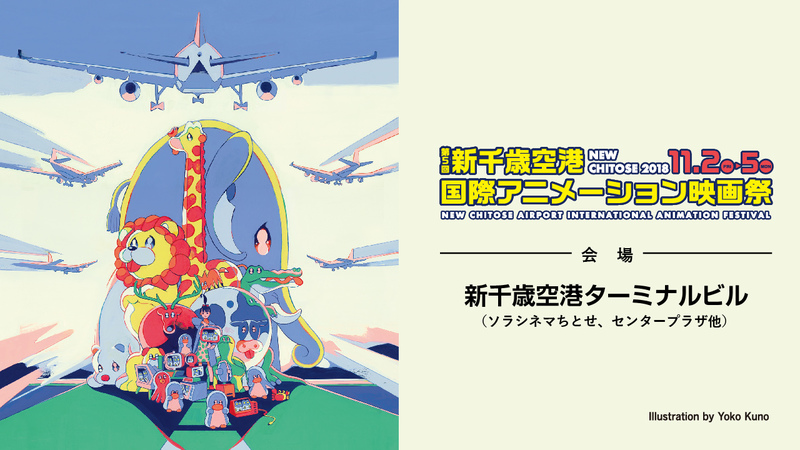 "New Chitose Airport International Animation Film Festival 2018" is to be held from November 2 (Friday) to November 5 (Monday). This festival, held inside a terminal building of the airport, marks the fifth anniversary. It is an international festival for the promotion of exchanges with domestic and international artists and fans in the field of animation, which is a world-wide culture, mainly set on a movie theater on the 4th floor of the domestic terminal.

Competition programs are the pillar of the festival. In the short-work competition, 76 films were selected from 2,043 works submitted from 86 countries and regions around the world while 5 films will be screened in the feature competition, which is to be newly established this year.

The festival has special programs as well. The feature film "Liz and the Blue Bird," made by the staff of the movie "A Silent Voice," will be screened with powerful sound equipment originally used for live music performances. Director Naoko Yamada will visit the festival for a stage greeting. The Hokkaido region will also welcome “Homecomings & Naoya Sanuki,” a Kyoto-based band which will present “New Neighbors,” a collaboration event between music and film, for the first time. The screening of “Isle of Dogs” will be accompanied by an acoustic live performance by Homecomings. In addition, the festival will show a variety of other programs, including the Bakuon (exploding sound) screening of "5 Centimeters Per Second" by Makoto Shinkai, special free screening of "Summer Camp Island" which will be aired next year on Cartoon Network.

Furthermore, at the 2nd-floor Center Plaza on the domestic flight terminal, admission-free events such as “after-recording” experiences of voice actors and animation workshops will be held. Please check the official website of the festival (http://airport-anifes.jp/en/) for details.